The Longest I’ve Ever Been Anywhere—and Making It 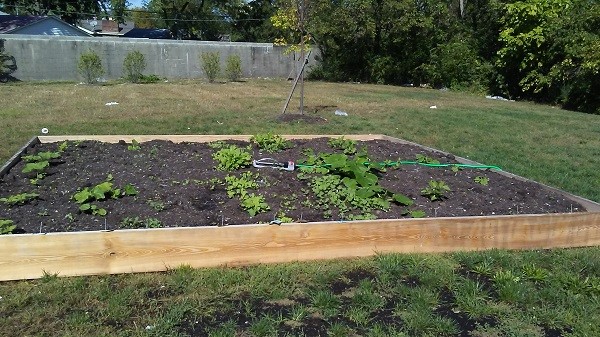 Donny H. says his apartment and the new garden at Key Terrace in Kettering have given him roots for the first time in a long time.

Key Terrace is a permanent supportive housing complex — owned by Miami Valley Housing Opportunities, with supportive services offered by St. Vincent DePaul — for people who have struggled with homelessness. Donny, who was homeless on and off for 20 years, has lived there since 2017. Last summer he took charge of a 16-by-16-foot raised garden, a new project of the Five Rivers MetroParks community garden program.

The flourishing garden allowed him to develop a deeper sense of self and independence. While other residents dabbled in the garden, said Dianna Shepherd, a Key Terrace case manager, Donny put in most of the work. “This was like his baby,” she explained. “He built our garden bed. He planted it and watered it, and he weeded it.”

Since the garden got a late start, the crops were late bloomers, but the garden soon overflowed with sunflowers, collard greens, spinach, mustard greens, beans and pumpkins. Donny expected to put seeds in the ground earlier this year to grow early-season plants like tomatoes and lettuce as well. Donny looked forward to sharing the fruits of his labor with the other residents in hopes that they would use it to experiment with new recipes and encourage them to connect with their community garden.

Shepherd hopes the other residents will be eager to participate in 2020. Donny hopes so, too, and planned on expanding the successful project. He wants to build a second raised bed, to create more opportunities for other residents to have the same experience he did. “This is the longest I’ve ever been anywhere at one time and making it,” he explained.

Thank you to Five Rivers Metroparks for helping our SVdP residents establish a new garden project and for reporting to the community.

Make a donation to support Donny and others as they plant their roots: