Homeless for the First Time at 73 Years Old

Maureen is smart, funny and more than a little bit feisty. At 73 years old she’s as proud of her Native American heritage as she is of her self-sufficiency. For 38 years Maureen worked with animals at the Cincinnati Zoo, and for the last 22 years she has lived in the same apartment. She always paid her rent on time, obeyed the rules, and never bothered anybody.

Then two years ago, Maureen agreed to let her boyfriend move in. He convinced her that he wanted to help. He told Maureen that if she gave him the rent money, then he would take care of paying the landlord. He did not. Says Maureen, “The guy I was with was a crackhead and I didn’t know it. I gave him my rent money and he smoked it up.”

After 22 years at the same residence, Maureen got her first-ever eviction notice for non-payment of rent. Since she had social security income and a long rental history, Maureen was concerned, but not alarmed. She tried leasing another apartment, but quickly found that no one would rent to her since she had just been evicted. 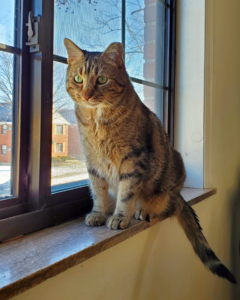 After a lifetime of playing by the rules, Maureen became homeless. Says Maureen, “When I had to move out it was overnight – they sent somebody to make sure I left. I just grabbed my cat, some cat food, a few pieces of clothes and whatever I could fit in my cart and left.” She left behind her furniture, her clothes, her television, three heirloom Native American dream catchers, and everything else in her home.

With little else but her beloved tabby cat, Leo, to comfort her, Maureen had no place to go. She recounts, “I didn’t know what to do or where to go, so I just wandered the streets. That first night I made my way to Courthouse Square to sleep. I stayed there for two weeks. It was a nightmare. I was so scared, and I just wanted to be left alone.”

Thankfully there were a few kind souls with eyes wide open who wouldn’t look past Maureen nor leave her alone. Two workers whose job it was to clean Courthouse Square were concerned for Maureen and contacted Kay Kelbley, a social worker and Program Case Manager at SVdP. Kay immediately began working on a solution. Says Maureen, “I was rescued by Kay. The very next day I was off the street and at Safe Haven.”

Safe Haven is a SVdP housing ministry that provides shelter, food, clothing and case management support for eligible homeless people who are committed to becoming self-sufficient and attaining permanent housing.

Since October 2019 Maureen has been safely sheltered at Safe Haven. Thankful to be off the streets, Maureen is proactively working with her case manager on a permanent housing solution. Looking toward the future, Maureen says, “When I leave Safe Haven, I will miss the people, but I am looking forward to having my own place again and being self-sufficient.”

That is a future that we all look forward to.