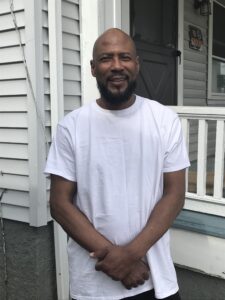 “Man, I’ve done it all. But I am trying to change my life,” are the first words from 62-year-old Safe Haven resident, Ric.

As a kid, after his parents divorced, Ric was raised by his mom. While Ric’s mom was at work, he would spend the afternoons at a local park playing basketball. “I was a good basketball player, and I got to know all the older kids—including the drug dealers,” he remembers.

By high school Ric was teetering between basketball and drugs. “I made the basketball team, but I didn’t mesh well with the jocks or the coach, and was kicked off the team,” Ric recalls. “That was a fork in the road where I took the wrong fork. Instead of being a good basketball player, I got good at dealing drugs.”

For three years, until he was arrested at age 18, Ric dealt drugs. He says, “I kept hearing my mom’s voice in the back of my mind asking me to be better. So, after probation I went back to school, got my GED, and became an apprentice carpenter.”

In the ensuing 30 years Ric would continually teeter between the two worlds of hard work and drug use. He would stay clean for weeks, months, sometimes even years. He would find a good job and then lose it after falling back to drugs. “I was trying to be better, but that demon was in me,” he explains. “I started using cocaine and got addicted to crack. I was arrested three more times. I knew the chances I was taking were taking a toll on me, but it seemed every time I tried to change, something would block me.”

When he was 50, one of Ric’s old neighborhood friends suggested he make a clean break. Ric headed to Minnesota, found a place to stay at a halfway house, and got a factory job. Ric was clean, sober, employed and on an even keel for the first time in decades.

Then a few years into the job, Ric was injured while working in the rafters at the factory. Ric headed back to Dayton, in considerable pain. It was another turning point. “I had good intentions, but I quickly fell back into my old patterns and influences, and I started dealing again,” he admitted.

After years of an abusive relationship and months of homelessness, Ric knew he needed help to reclaim his life. “My whole life I tried to get sober and fix things on my own, but I knew I needed help,” he acknowledged.

Six months ago, Ric was admitted into the SVdP Safe Haven supportive housing ministry, where the chronically homeless can get help addressing significant obstacles in obtaining and maintaining housing. Participation in mental health recovery, life skills, physical fitness and spirituality groups is encouraged, and assistance from area agencies is provided. Ric is now working side-by-side with his case managers and counselors on a plan to reclaim his life. His plan includes support on staying clean and sober, getting a job, and finding permanent housing.

“I thought I could do this on my own,” Ric reflects. “And Safe Haven is really helping me. The people here have been so supportive. They support me without judging me for how I got here. I really believe when you can’t do something for yourself, God will put someone in your life to help you.”

To read more personal stories of how you make a difference in the lives of others,  please click below to see our 2019 annual report.