Trombone Larry: From the Shelter to the Boardroom 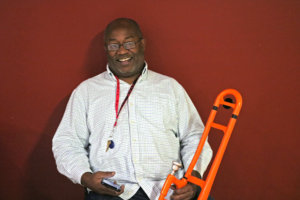 By almost any measure Larry Hickland, aka “Trombone Larry,” had the odds in his favor. As a child he was well-loved, well-fed, well-educated, and musically gifted.

In college, Larry was sought out to play with elite musicians, and by age 25 he was thriving. “In the mid-80s everything was good.  I was driven. I was playing. I was making money. I had it all,” Larry recalled.

From this energetic peak the next twenty years began a slow, incremental, and downward slide toward homelessness. The gigs dried up. Larry got married and divorced twice. After a bad car accident left Larry with a fractured sternum, he found himself struggling with pain, loneliness, and an unclear future. Unable to keep up, Larry lost everything – including his house, his car, and his trombone.

But God and some caring people had their eyes and hearts on Larry. In 2015 a friend mailed Larry a trombone and he started playing again in a church choir. “I had been away from playing, away from God, and away from everything. Finally, I was listening again, and playing again, and things started to come back.”, said Larry.

Optimistic but still homeless, in 2017, Larry headed home to Dayton, taking a Greyhound bus directly to the St. Vincent de Paul Gateway Shelter for Men on Gettysburg Avenue. Says Larry, “When I was in the shelter, Michael, St. Vincent’s Executive Director, would hear me play the trombone. I told him my story and for once in my life I could admit that I was educated, and homeless, and a child of God.”

A case manager helped Larry apply and get approved for both disability and an independent living apartment. Having survived the arc of homelessness and living in secure housing for the first time in six years, Larry was eager to give back. Michael knew that Larry could provide a unique and needed perspective for SVdP, so he asked Larry to serve on the SVdP Community Board and he agreed.

Says Larry, “There was a time in my life when I thought I was below everything and not worth anything. Now I get to help people embrace God and help SVdP understand what it really is like to be homeless.”

And that is music to our ears.