2019 Tornadoes: An Avalanche of Needs

The area surrounding Queen of Martyrs Parish in North Dayton is filled with hard-working families not used to needing nor asking for help. That self-sufficiency was tested a year ago when a devastating F4 tornado, carrying 170 mph winds, left a path of destruction in its wake. Homes, businesses and the church campus itself were severely damaged or destroyed. 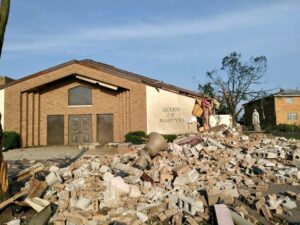 Photo by Curtis Kneblik via The Catholic Telegraph

Louann Geel, president of the SVdP neighborhood volunteers at this parish, recalls the devastating aftermath for so many families who existed just outside that bubble of self-sufficiency. “It was an avalanche of needs. We had so many people displaced who needed help. At first, I thought if they didn’t lose their house, they were good. But not true. People lost electricity so they lost the food they had for the month. People couldn’t work because where they worked was damaged or without power for weeks. And for many, after missing even two weeks of pay – all of a sudden you can’t pay for food or rent or utilities.”

With so much need, a group in at Queen of Martyrs Parish began the work of rebuilding the church itself. At the same time, a small but mighty group of ten SVdP neighborhood volunteers ministered to the needs of their neighbors. They rented motels for temporary housing, paid rental home deposits, funded furniture vouchers, provided food and clothing, and paid electrical bills. Says Louann, “People didn’t want to ask for help, but after they did, we were able to help them shift from being on that bubble, to being outside that bubble.”

In all, the ten Queen of Martyrs SVdP volunteers directly helped over 95 families.

Louann is quick to point out that they did not do this alone.  “The SVdP Dayton District paired us with three other St. Vincent groups – from St. Albert the Great, Incarnation and St. Anthony, and they stepped up.  They helped us with donations, with manpower, and with manning calls. Plus, we received donations from parishes all over Ohio.”

In the five years Louann has been involved in the SVdP neighborhood conference this is by far the biggest need they’ve had to meet. These St. Vincent neighborhood ministers see this work as God’s grace through their hands. “Some of us have been blessed with so much more than others,” explains Louann, “and we see it as our responsibility to help each other up the mountain.”